My idea for this project, when I conceived this guitar model, was to put the guitar player first: I wanted to solve some problems linked to playing the guitar, offering the player a real and actual “work tool”.

To help the musician while studying, in their expressiveness, and during live performances I have made a guitar:

The strings appear less tight for both the right and left hand. The structure of the guitar and the unique way in which I make my instruments offer a better playability and less fatigue.
The treble strings present a very homogeneous timbre throughout. They preserve their character and their lyricism even in the higher notes, where often the sound becomes quieter and uneven, increasing in this way the control the musician has over the instrument.

With this project, I can offer a guitar with a great balance between trebles and basses.
Thanks to the care I put into making elastic the structure of the instrument and of the soundboard, I am able to obtain a highly sensitive system of “action-reaction” between strings and soundboard. In this way, the guitar player can have the highest sound quality even when playing Piano and a powerful sound when playing Forte. Moreover, this system makes the sound versatile and captivating.

The guitar player can benefit from a wider timbre range as a result of the full and overtone-rich sound. This instrument can be used for a wider repertoire thanks to its versatility to various styles, also during high performances. 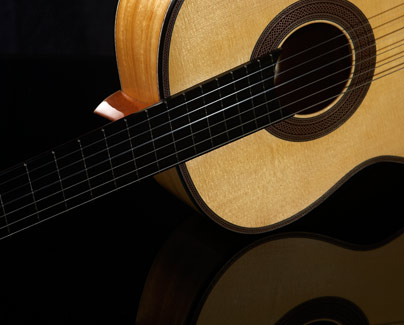 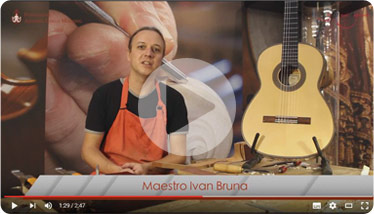